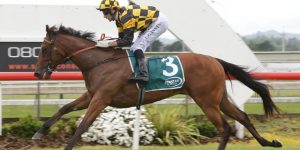 The leading lights of Lance Noble’s Lindsay Racing team are set to step out in feature events at Matamata on Saturday week.

Both horses have Group One targets a fortnight later, with Bavella being aimed at the Gr. 1 Sistema Stakes and Prince Jabeel the Gr. 1 Barfoot & Thompson Auckland Cup at Ellerslie on March 9.

“Bavella pulled a muscle in her hind-quarters when she won at Pukekohe and she had to be confined to her box for three or four weeks,” Noble told www.theinformant.co.nz. “She’s good as gold now though and I’m very happy with where she’s at.

“Leith (Innes) came out and rode her in some serious work last Friday. She’s well up to the mark and while other two-year-olds have come into the equation since she last raced, I’m confident she’ll be ready to give a good account of herself in the Breeders’ Stakes.”

Noble was based at Matamata until taking his position with Brendan and Jo Lindsay three years ago, and it would be hugely satisfying to win the flagship event of the racing club that he is still a director of.

“I’ve had runners in the Breeders’ Stakes before but I think it would be fair to say Bavella would be my best chance of winning. It’s not the end-all, but it would still mean a lot to me if I could do it for Brendan and Jo.”

Prince Jabeel has made excellent progress since returning from a 10-day break after his big Trentham effort and will have just one start before stepping back up to 3200 metres in the Auckland Cup.

“The Kaimai Stakes at 2000 metres should be ideal as a lead-up to Ellerslie,” Noble added. “He’s a naturally fit horse but he will still be on the fresh side for Matamata – that fits in well.”

Prince Jabeel, whose half-brother Von Tunzelman won the Kaimai Stakes in 2017, went into the Wellington Cup off a win in the Gr. 3 City of Auckland Cup at Ellerslie on New Year’s Day. His third placing at Trentham carrying 59 kilograms was very brave given he was conceding six kilos to the winner Gorbachev and runner-up Dee And Gee.

“The way it works out with set weights and penalties versus handicap conditions, he’ll have three kilos less in the Auckland Cup,” Noble pointed out. “That’s a far better position to be in.”

With stable jockey Leith Innes suspended until March 3, Bavella and Prince Jabeel will both be ridden by Vinnie Colgan at Matamata.