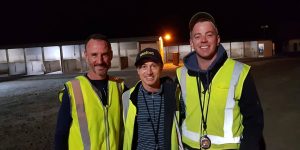 It was only three-quarter-pace work but it was still enough to tell the bloke on top, Australian jockey Glen Boss, that he’ll be more than a runner’s chance when he takes In A Twinkling to the start for Saturday’s Vodafone New Zealand Derby. The stars in the sky were still twinkling when Boss rolled up at the Matamata racecourse this morning at 4.30, ready to put a trio of Jamie Richards-trained horses through their paces under floodlights on the plough training track.
The first of them was star juvenile Probabeel, who covered a steady 800 metres as she continues her preparation for a Sydney autumn campaign. “She’s a lovely strong filly that girl,” Boss reported back to Richards. “It feels like she’s hardly breathing, she just does it so easily.”

Next up was In A Twinkling, who followed his Derby-bound stablemate Prise De Fer (Dan Miller) over a round on the plough. With his head down around his knees, relishing his work, In A Twinkling was probably disappointed that Boss allowed him minimal rein to cover 1200 metres in 1:28.4 and the last 600 in 43.2. “He feels great, I love the way he goes about his work,” said Boss of the Fastnet Rock gelding. “He’s obviously very professional and after seeing the videos of his last run, I reckon I’m in with a big chance.”
In A Twinkling’s close second to Derby favourite Surely Sacred was in the opinion of many good judges the run of the race in the Avondale Guineas. “He was there the whole trip and the way the race was run he would have been doing well to finish somewhere about sixth,” Boss added. “To only just get beat was huge and it doesn’t seem to have bothered him.”

Richards is on the same page, giving the big tick to both his Derby runners. “They’ve had good preps, I’m very happy with them,” he said.
“They had a decent hitout on the course proper here on Saturday morning, their Tuesday gallop was right up there, and that’s all they needed to do this morning. They’re ready.”

Boss, based for the past few years in Singapore and best known as the jockey who partnered Makybe Diva in her historic Melbourne Cup hat-trick, has a five-strong book on Saturday. For Richards he will also ride last-start winner Queen Of The Air in the Listed Mufhasa Stakes, while he will ride Spring Heat for Lance O’Sullivan and Andrew Scott in the Gr. 3 Waikato Stud Plate, Jim Pender-trained filly The Real Beel in the Gr. 3 Sunline Vase, and The Rebel Knight for the Rogers family in the Nathans Memorial.
Matamata’s two other form runners for the Derby, Waikato Guineas quinella Sponge Bob and Arrogant, also pleased their trainers with their final serious work. Sponge Bob, who had his first look at Ellerslie with a course proper hitout on Monday, was let off with striding work over 1200m in 1:27.4 and 41, while Arrogant had raceday rider Cameron Lammas in the saddle for strong work on the course proper. His time for 1200m was 1:24.7 and the further he went the better he looked, finishing off with 600m in 37.2.